St. Francis Under the Pole Beans

Hello. I hope you are all having a good, quiet weekend. The weather has been really nice these past three days. Cool and dry. What a change! Green beans are really producing well, maybe too well for me.

I always liked the imagery of St. Francis. He was known as a friend of animals and nature. Here he stands under the pole bean arbor I made this spring. I wanted to make more room for onions and potatoes, so decided on pole beans rather than bush beans. 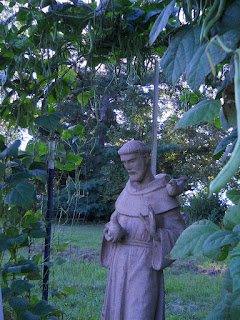 Here's another view. As a non-Catholic, I always thought my own religion was a little too severe when it came to saints. Of course that was years ago in Lutheran confirmation class, so I have decided for myself that Francis was a good guy. How could you not respect a guy who invited birds to rest on his shoulders? 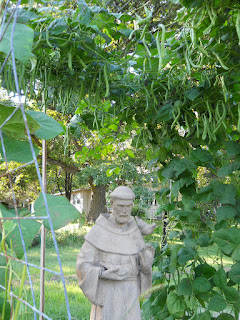 Today, there was a nice clear view of my farm's hayfield looking to the southwest. The neighbor that has been harvesting the hay has decided to plow up the field and disk it. He still has to seed it with alfalfa and red clover. I'm hoping that it gets done this fall. I don't have the farm equipment to get it done, as it's very expensive. 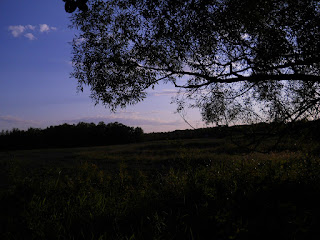 As I worked in the kitchen getting green beans ready for the freezer I took this picture of the view to the north. My house is surrounded by a lot of trees, maybe too many, but it has kept the house cool this summer. I don't have air-conditioning. 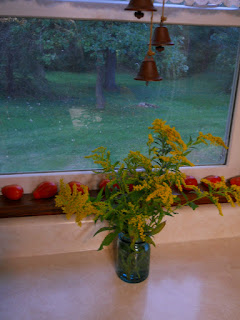 I don't follow the traditional freezing procedure. I don't blanch the beans. I also don't "flash-freeze" them on cookie sheets. For me, it's a waste of time and anyway not really possible in a conventional freezer. I just lay enough beans flat in one layer in gallon freezer bags to feed maybe 2 or 3 people at a meal. They come out just fine and a lot more flavor remains than if you blanch them. I make sure to wash and re-use the bags always.

Baby Boy (Byron) wanted me to show him off by the ripening plum tomatoes and goldenrod. He likes the attention. Some folks say the plum tomatoes don't have much flavor, but I think it comes out when they are cooked. I really like them. 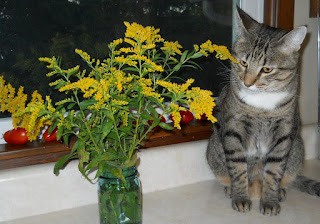 I've been trying to cook out of the freezer to make more space. Chicken soup was on the menu tonight. I make enough for 5 more meals later on. It's especially good to have them ready for the winter, when I like to enjoy the luxury of the "hibernating season." So I'll be making more soup this coming week, chili, chicken, ham and navy bean etc. Today I used up carrots that were slightly past their prime, a few small onions and more green beans. I try to make do with what there is here. 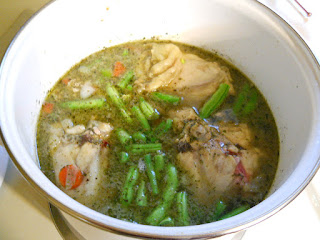 I hope you take time to make use of what we've been given. Simple food is the best. Have a good weekend.

Posted by The Wykeham Observer at 8:12 PM 10 comments: